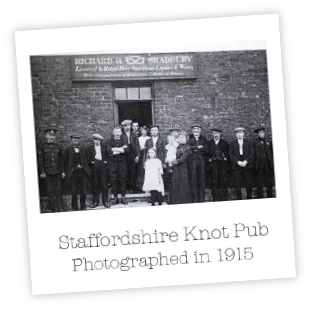 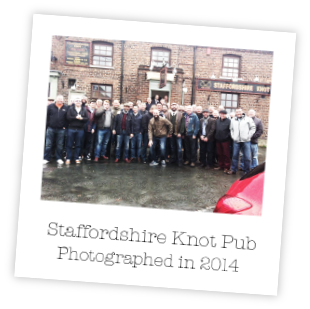 The Workhouse
The Staﬀordshire Knot pub as it’s known today was once a Workhouse, built in 1735 to house those that fell on hard times and / or the aged for as little as £2 3s 2d per week.

Richard Winkle’s accounts record the amounts of materials used and the costs incurred in the building of the Workhouse. Thomas Staton supplied 17,800 bricks and over 30 ‘thraves’ of straw were used for the roof. Timber, lime, brick, sand and stone were used along with 9 measures of hair. There was 59’ of glazing and workmen were occasionally paid in ale! The ﬁnal accounts of August 29th 1736 amounted to just over £53.00.00 an overspend of £4 9s 11d.

The workhouse changed use in 1844 when it was sold to John Myatt (grocer come beer seller) for £300.00 who later sold it to Thomas Bailey (beer seller) in 1851 (for the same use and practice). Later Mr Hopkin (a butcher come beer seller) purchased the property in 1874 for a handily sum of £500, who again set up shop to serve the residents of the village and passers-by ﬁne fresh produce (including ale for the working man). It wasn’t until 1889 when he sold out to the famous Greenall Whitley & Co Ltd that it was described as a fully licensed Inn or Public House, known today as ‘The Staﬀordshire Knot’.

The Staﬀordshire Knot pub has been the heart oﬀ the village for over 170 years and has been home to our friendly ghost Mary (the workhouse matron) seen by several people late at night, disappearing through walls that were once door openings (later bricked up following renovations): photograph illustrates what people have actually seen.